These 10 sites are the stops along the Heritage Tour and are important pieces of the history of the P.E.O. Sisterhood. Use this information as a virtual tour or to supplement a driving tour of your own.

The famous stile (a set of steps with a middle landing going over a fence) on the southeastern corner of the 1869 campus was where Hattie Briggs and Franc Roads sat to discuss forming “a society of our own” on that mild Thursday morning, January 21, 1869. Stiles were necessary to enable access to the fenced Wesleyan campus and its two buildings. Each of the four corners of campus had a stile (not a gate). Riding horses, horse-driven transportation or roaming domestic animals were not wanted inside the fence. In this time period some public buildings, like court houses, also were enclosed by fences with stile accesses. Today, this southeastern campus entrance site is marked by a brick gateway. 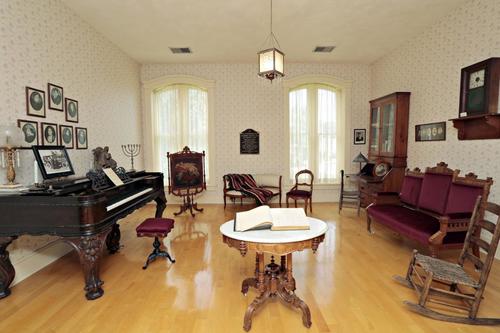 The second floor music classroom is the location of the founding of the P.E.O. Sisterhood on January 21, 1869.
Under the leadership of President James Harlan* and financial agent Rev. Isaac Stewart (Founder Ella Stewart’s father,) funds were raised for the construction of “a main edifice” for Iowa Wesleyan University. The building opened for classes in the fall of 1855.
Old Main is the heart of campus today and is the oldest collegiate classroom facility, built for that sole purpose and still in use, west of the Mississippi River.
*See statue in front of University Chapel 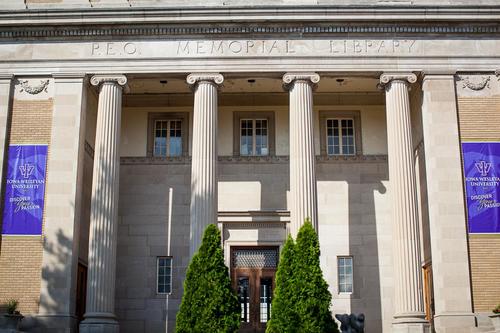 September 27, 1927, the P.E.O. Memorial Library was dedicated to honor P.E.O.’s seven Founders. This building, on the campus where the Sisterhood began, was a joint venture between Iowa Wesleyan and P.E.O.  Iowa Wesleyan provided the land (in close proximity to the southeastern corner stile of the original campus) and P.E.O. built the structure with contributions from 1,308 active chapters and 41,390 active members. Its original uses were mutual as well. The main floor housed the collegiate library; the lower level had both library purposes and the P.E.O. Supply Department; on the top floor were the organizational executive offices and Memorial Hall that showcased artifacts and memorabilia commemorating the Founders and early history of the organization.

In the interior rotunda of the main entrance, the names of the seven Founders are recorded on a bronze tablet gifted by Chapter Original A; their leadership spirit is remembered by seven handpainted panels in the domed skyscape.

In 1960 the P.E.O. Executive Office moved to its present administrative location, 3700 Grand Avenue, Des Moines, Iowa. In 1968-69 the historical items belonging to the Sisterhood at large were moved to its newly constructed Centennial Center. Following each of these moves, Iowa Wesleyan reconfigured the space and use of the facilities. In 1969 a new library building opened on the north side of campus. Today, this 1927 P.E.O. building is home to the university’s art gallery and administrative offices.

The Harlan-Lincoln House, located on the north side of the Iowa Wesleyan University campus, has been maintained as a museum since 1959. It interprets the important story of an influential Midwestern family here as well as on the national scene. James Harlan was a visionary president for Iowa Wesleyan University and longtime trustee, U.S. senator and secretary of the interior. Iowa Wesleyan and Mount Pleasant connections with the James Harlan and Abraham Lincoln families solidified in 1868 when James and Ann Eliza Harlan’s daughter, Mary, married Robert Todd Lincoln, son of Abraham and Mary Lincoln. The home at the corner of Main Street and Broad became the Harlan family’s permanent residence in 1876 after Senator Harlan retired from national politics.

In their youth, the three Harlan-Lincoln grandchildren were frequent visitors at this house. Like many grandparents do today, there is a preserved door measuring their heights in 1883. Granddaughter Mary Todd “Mamie” Lincoln (1869-1938) became a member of Chapter A, P.E.O. on September 17, 1884 (one month before her 15th birthday;) granddaughter Jessie Harlan Lincoln (1875-1948) was initiated into Chapter A on December 31, 1895 (almost two months after her 20th birthday.)

Before Senator Harlan's death in 1899, he gifted the home to Robert Todd and Mary Harlan Lincoln. They subsequently donated it to Iowa Wesleyan University in 1907. The building was used as the presidential residence for Iowa Wesleyan until 1926 and then as the art department before opening as a museum. The museum collection includes a fragment of the coat Abraham Lincoln was wearing during his assassination, a mourning veil worn by Mary Todd Lincoln, Senator James Harlan's desk, and bound Congressional Records.

This is the only remaining home of a P.E.O. Founder. At the time of P.E.O.’s founding, Mary Allen lived here with her parents, Reuben and Evelyn, her older sister Eliza (called Cassie – who had graduated from Wesleyan in 1868 and became one of the first two initiates,) her brother Robert, age 15, and sister Evelyn, age 3.

The Allen home was the location of the first P.E.O. business meeting on Saturday, January 23, 1869. Mary Allen described it as a time when they “thought and talked and planned of how to be.”

Today, this house remains a private residence but has had several structural changes since 1869.

This Anglo-Italianate residence was a new house in 1869 for the Ambler family. Mr. Henry Ambler was a successful attorney and businessman. Among his several P.E.O. daughters, we remember Ione, one of the first two 1869 initiates and a graduate in the Class of 1871. Ione is also remembered for advocating growth in organizational structure, and as such, presided over a conclave of local chapters when they met in Bloomfield, Iowa, in 1882. Ione’s older sister Penelope (Nellie) graduated from Iowa Wesleyan in 1863, prior to P.E.O.’s founding. Nellie, a former English literature instructor and 1878 initiate, also believed in the necessity of centralized governance for local chapters if P.E.O. were to grow. She helped prepare Constitutional revisions in 1881 and as importantly, wrote much of the beautiful language of P.E.O.’s Ceremony of Initiation still in use today.

Chapter A’s 1884 initiation reception for Mamie Lincoln was held in this house. Look carefully and you will see an etched “A” in the glass of the front door. 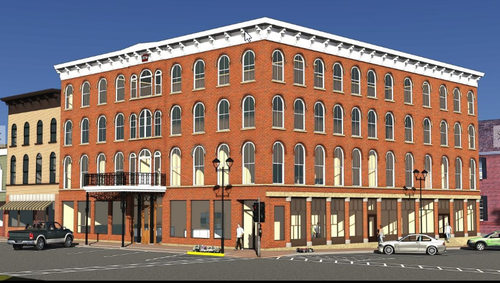 With Alice Bird’s father, Dr. Wellington Bird, as one of the original investors, this large first-rate railroad hotel was built in 1856, one year after Old Main. When finished, the claim was offered that its four stories were the tallest building west of Chicago.

The Brazelton House Hotel was a popular location for many social and cultural events of the time. Its dining room on the second floor was the site December 26, 1870, of the Sidereal Soiree, the first elaborate P.E.O. party with gentlemen invited. 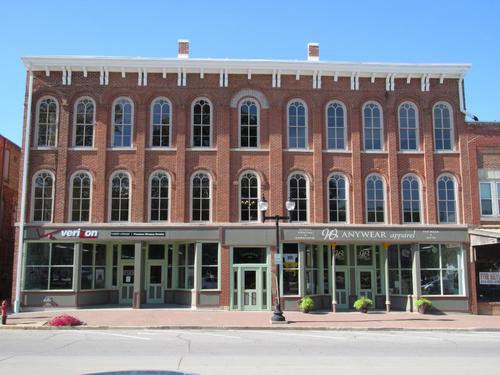 In 1861 business partners Henry Ambler (#6 above) and E. L. Penn built this large brick building for commercial retail business, professional offices and a hall for civic and community purposes. At the time this top floor meeting hall was the largest and best equipped venue in the area. It hosted many abolitionist and women’s suffrage activists of the day including Anna Dickinson, Frederick Douglass, Sojourner Truth and local orator James Harlan. Iowa Wesleyan commencement exercises were held here in 1869 and included the five senior Founders (Alice Bird, Alice Virginia Coffin, Hattie Briggs, Mary Allen and Franc Roads.)
The second floor housed W. I. Babb’s law office. In this office, his sister Arabella Babb Mansfield read the law. June 1869 she was examined and licensed in the third floor meeting hall, also then serving as space for the district court. 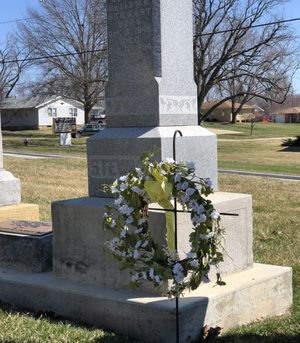